I didn’t know what to expect when I went to Croatia. I knew it was Europe’s hottest travel destination but if I’m honest, I was hesitant about going to this region as a black person. If you are used to traveling to Western Europe and are yet to venture to Eastern Europe I’d suggest you put your skates on. I promise you will be pleasantly surprised and I had no reason to be worried at all.

There is something for the most discerning tourist. From historical, architectural and hiking tours, to sailing and music festivals Croatia has it all. To top it off the people are super friendly despite some probably never having seen a black person, most were polite. Until recently it was purse friendly but compared to Western Europe your money will still go further.

The Game of Thrones TV series has put this destination on the map however the success of this ‘cheap’ destination has some might argue, become a victim of its own success. It has gone beyond being just a summer destination. Many people travel year round, although some activities are closed during the off season there is still plenty to see and do without the crowds or sweltering heat.

Upon landing at the airport, we were able to buy a one way coach ticket to Dubrovnik. We left via Slovenia so there was no point getting a return. This was also cheaper than a taxi and the coaches were modern with air conditioning and operated regularly. The coastline views are breathtaking! I can’t recall being so mesmerised by a country before. The drop off was at the Old Town Gate.

We chose to stay outside the old town as it was quieter during peak season. The country was also experiencing a heat wave so it was about 35 degrees and peaked above 40 during our stay. Our host told us to get a taxi from the gate but as we thought it was only 10 minutes away we decided to walk. It was up hill, with luggage, in 35 degree heat! This was not pleasant and took us nearly 30 minutes. We later discovered a bus would take us up the hill in the evening and walking down hill was easy and the views were worth the stroll.
We chose a combination of apartments from Booking.com and Airbnb during this trip. I will add that most properties were advertised in Euros although the official currency in Croatia is the Kuna. Apparently it is illegal to pay for goods and services in Euros however all our hosts requested this. We discovered this a year later so be prepared to have the two currencies or stay in an established hotel chain which will accept the Kuna. Not sure if we broke any laws but this seemed fairly common practice during our stay.

We were in Dubrovnik for 4 days with no set plans.  After a shower and rest we went to explore the old town and lunch. There are so many ally ways you can turn down to avoid crowds and after exploring we found a lovely restaurant. We later made our way to the port and found a restaurant which we used to go to every day for drinks and seafood. From this port we could see the boats coming in from tours and upon enquiries discovered a day of island hopping with drinks and lunch was £20. We booked this for the next day. 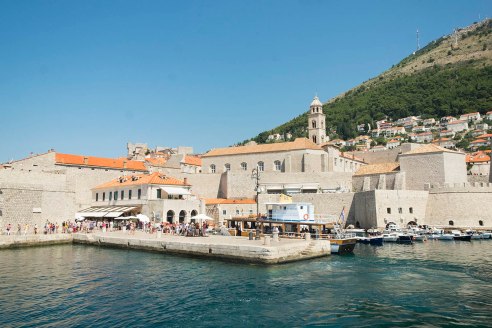 The tour started at about ten in the morning and we got to visit about three islands. We chose a smaller boat with about thirty people and not as boisterous as the larger party boats. It was all well organised and once we set sail, drinks were flowing, soft and alcoholic with local red and white wine on offer. If there is one thing about the water around Croatia is that it is so clear! It is the Adriatic so not warm waters but crystal clear. You could see the fish swimming alongside the boat. At each stop we had about 45 minutes to see the port, have a drink or swim. On one of the islands stayed longer, under two hours, this a lovely sandy beach – rare in this area. Most beaches have pebbles in Croatia so you have to search for sandy beaches and ideally pack beach shoes though many shops readily sell them nearby. 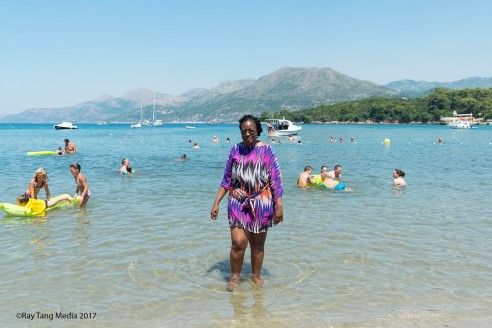 The lunch provided was grilled fish, bread and cabbage salad you will get this everywhere. Sounds boring but I’ve never enjoyed such a simple salad in all my years. This was ready for us to eat after the second island after 12 or so and we had this on route to our next island. We chatted to a couple sat at our table and they were from Scotland and they equally enjoyed Croatia and had been there a few days longer than us. If I recall they were not staying in Dubrovnik but on another island and the boat had picked them up before us. The islands we visited were Sipan, Lopud, Kolocep.

We were back at the Old Port ready for sun downers & seafood at our favourite restaurant which was a few steps from the boat. We walked around the old town before ice cream and a bus back to the apartment. 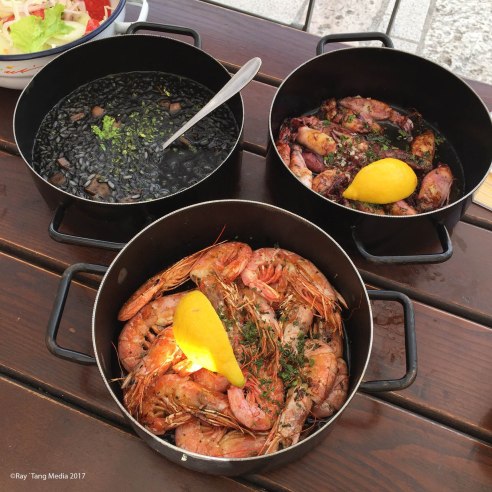 The next day we decided to do the walk around the city walls. I’d advise doing this first thing in the morning as the heat is manageable and you have shorter queues. It would be amazing to do early evening for the sunset, however each time we saw the queue, it put us off as who has time for that on holiday? Remember this is during a heatwave so regardless of how early we went it was sweltering as we walked round. The views over the town, the sea and looking into peoples garden is unreal. There are also well positioned cafes, toilets and first aid personnel along the route as well as stewards who can sign post exit routes should you need to get down. I felt so accomplished completing this tour. 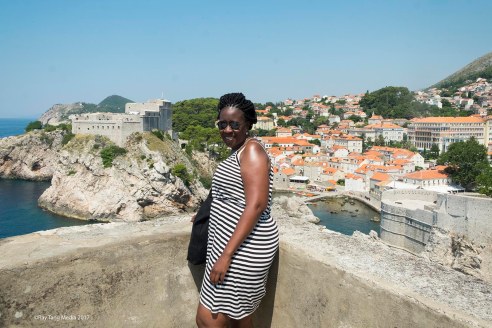 After a quick break we took a bus to an area called Babinkuk, which if you don’t like hills would be perfect for you as it is flat. It’s more residential, quieter and a mere 20 / 30 minutes from Old Town. The buses are super easy to use and sign posted. We went to the beach, about a 10 minute walk to get there. There is a hotel with beach access though only for residents.

We found a little cove where all the locals went and when we were ready for lunch, we went to the hotel restaurant. The service was diabolical and I was not impressed at seeing my order of fish cooked then left for over 20 minutes before the waiter decided to serve it. It was also not cooked well so I decided to send it back and get a burger. This was in the 5 star restaurant, after we left we found a little cafe (still part of the hotel) which we went to for drinks and realised we should have just eaten there in the first place as the staff were a lot more laid back. This was probably our worst dining experience on the holiday. 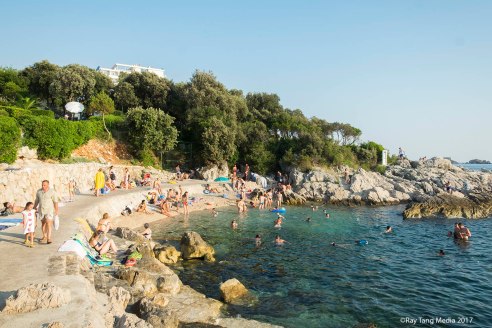 We left this area later in the day and took the bus towards old town but decided to stop off at another little town, Lapad though this was more catered to tourists and families with inflatables in the sea. We saw one of the best sunsets from this beach. We explored the neighbourhood, and found a restaurant with great reviews but no seats as we hadn’t reserved. They recommended another nearby which was lovely.
You will find lots of pasta dishes, risotto and the like the further inland you go. 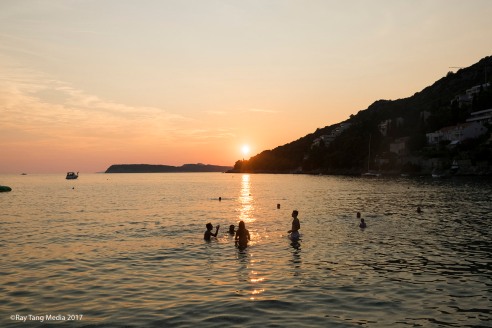 We got a bus back to our apartment.

On our final day in Dubrovnik we went on the cable cars. We went early in the morning so no queues and a speedy entry. We walked around took photos had a glimpse at the museum and as we had bought local pastries from a bakery nearby, had those whilst sitting outside. There is a restaurant up there but it’s expensive and as we didn’t have time for a leisurely meal. You can hike up and down the hill, but the cable car suited us fine. We went to the old town using the gate nearest to the cable car, changed some cash at the bank had coffee then back up to our apartment to freshen up and get out luggage. Our host had allowed us to do this and offered to take us to the port for our catamaran to Korcula. We arrived early so had some drinks across the road as we watched people queuing up in the heat. This is where I saw the second black woman in Dubrovnik. 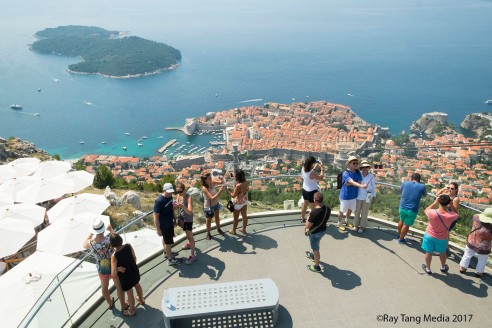 We bought our tickets online easily and printed these before leaving London. The hovercraft is quite big and has plenty of seats so I didn’t see the need to queue in the heat. You may not get the seat you want but you will get a seat. We were sat near the front and I got my window seat.

Please continue to follow for travel updates and do send me any questions about this trip if you have any.

2 Responses to “Marcy Madzikanda: On my first trip to Croatia – Dubrovnik”